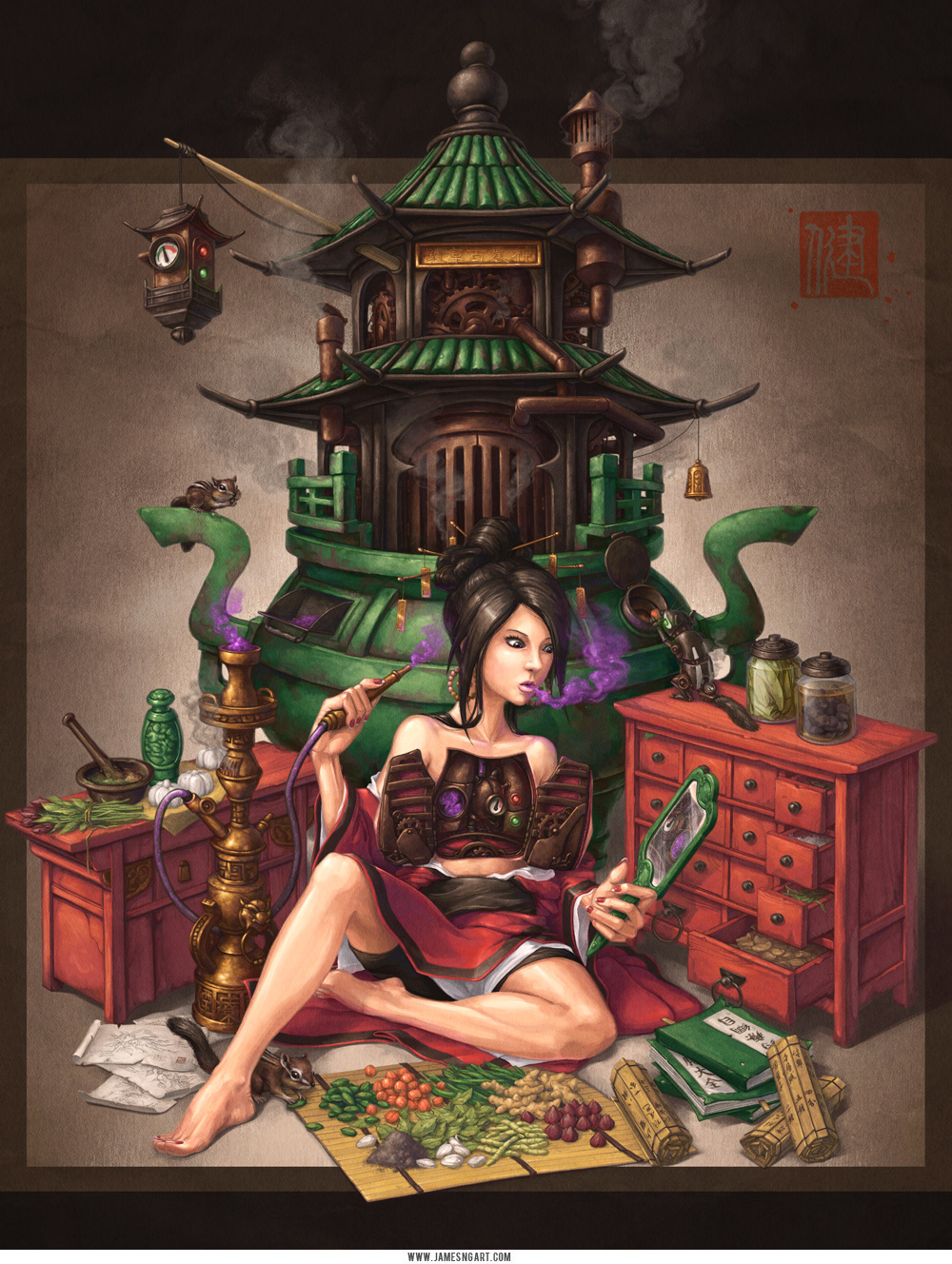 James Ng is a visual artist who makes his two homes in his native Hong Kong and his adopted city of Vancouver, BC.  He was the headline artist in the March 2011 Steampunk Exhibition, and he’s the winner of the 2009 Digital Artist Award for Concept Art.  I was introduced to James’s work via postcard-sized reproduction of his Imperial Steam series, and subsequently acquired the use of his painting “Thought Process” for the cover of The WisCon Chronicles 5: Writing and Racial Identity, which I edited.  Later, he agreed to be the featured artist for the inaugural issue of the literary quarterly The Cascadia Subduction Zone.

Since then I’ve kept up with James’s exciting oeuvre through his website.  His latest painting, “Crystal Herbalist,” moves me in many ways, and resonates nicely with the topic of this blog.  James has allowed us to reproduce the painting here and ask him a few related questions.

Your Imperial Steam series of paintings, you’ve said, plays with the premise that our last two centuries of modernization could have been driven not by the West, but by China.  Palanquins, pagodas, and other images fill the canvas–how do you use them to evoke an alternate present and future, rather than the past we often associate with them?

That’s something I ask myself every time I create a piece for my series. I want to make sure that it stems from the idea of “What would be possible today” instead of just painting something from the past and adding futuristic elements to it. I look at my series like a thesis paper; the original question of “What things would look like today if technology was led by another culture” being my thesis, and each painting acting as a supportive paragraph helping the reader ponder the possibilities. To achieve that aesthetic, I do a lot of research on Chinese history to see what was important before western colonization.

In August of 2012, when I first saw your painting “Crystal Herbalist,” you sent it to me with this explanation of the concept:

“Using the steam-powered alchemical furnace, the Crystal Herbalist fuses ingredients into a powerful, smokable extract. The powdered medicine is burned and inhaled while she measures the potency of each brew using her reinforced lungs and heart. Through the reflection of a mirror she looks within herself, assessing the lights and valves to calculate the effects of each new concoction.”

Do you have anything to add at this point?

That caption still tells the story pretty well. Like I mentioned earlier, my series is based on Chinese culture, and herbal medicine plays an important role there. One of the main ideas that came up when I originally envisioned my series was that the technology advanced in the direction the culture pointed. In today’s world, most cultures are catching up to the West, which sets the bar other cultures aim to hit. But what if technology from nonwestern worlds moved forward without the goal of meeting a certain standard? If the Chinese believed in their herbal medicine and wanted to continue to make it more effective, this would no doubt drive experiments and research in creating suitable technology.

We have made incredible technological progress in the last 200 years, probably more than our entire history as a human race. This progress was driven mainly by western science and belief, which is why western practices are the most effective in the modern world. There is no denying the effectiveness of western medical practice–my father is actually a western doctor in a hospital in Hong Kong. I simply wonder what possibilities there might have been if the massive influx of technology was developed and driven by a different culture and from different beliefs.

Can you write a little bit about your experience with Traditional Chinese Medicine?  Are there connections between the philosophical basis of TCM and your approach to creativity–balance, harmony, etc.?

Most of the time I use western forms of treatment, because my father is a western-style doctor, and he has a regular supply of western medicine. However, I am very into combat sports, and sometimes when I suffer injuries I seek out Chinese doctors for sores, bruises, and tears.

I have not thought about the correlations between TCM theory and my artwork, though if you mention balance and harmony, those are things I take into account for every piece of artwork that I do. Balance–between warm and cool and light and dark–is a very important part of an artist’s train of thought, and harmony between shapes and colors is just as important.

Are you working on other paintings in the Imperial Steam series?  What can you tell us about them?

Yes, I am. The series has taken a backseat in the last few months to my commissions, but it is something I will always work on. Currently I’m planning to design a sport or competition that is unique to this world that I’m building. I’m leaning towards something to do with traditional lion dance celebration or martial arts, with the aid of steam technology.

Interview conducted by author Nisi Shawl who is a long-time patient and friend of Monica Legatt LAC, acupuncturist at Downtown Seattle Acupuncture.